LINK research shows how cash habits have changed through the pandemic

Almost two years since the beginning of the first Coronavirus lockdown, LINK, the UK’s main ATM cash machine network has published its latest research looking at COVID-19's effect on consumers’ attitudes to cash.

We have set out below how responses have changed throughout the pandemic to today.

March 2020: The first survey was conducted during the first week of March 2020, when only 118 COVID-19 cases had been identified in the UK. At this stage, the idea that we were shortly facing a national lockdown UK seemed remote and most people (80%) had not yet changed their behaviour when it came to cash.

Of those which had, 9% were buying more staple foods, 8% buying more ‘other supplies’ (toilet paper, batteries etc.) and only 4% said they were avoiding cash and using contactless payments and cards more. Over three-quarters (77%) said they did not think COVID-19 was going to change their use of cash in the next six months.

Lockdown: LINK continued to do research through the pandemic and consumers’ use of cash very quickly settled into a new pattern. At the height of the national lockdown in March and April, ATM transactions fell significantly with the average volumes falling by as much as 65% across the UK. These falls were significantly higher in city centres and transport hubs. This was largely down to people staying at home, but also due to traditionally ‘cash heavy’ sectors such as leisure and hospitality closing alongside many sites hosting ATMs (such as cinemas, pubs and shopping centres) also shut.

Interestingly, with more people working from home, the decline was less acute in smaller towns and locations with higher levels of deprivation.

By mid-summer 2020 (when restrictions were lifted for the first time) over 75% of people were saying they were using less cash since the start of the pandemic and 80% said it would reduce their cash use in future. However, while cash use had fallen, it had not disappeared and 53% of people still said they had used cash in the past two weeks with 22% using it in a convenience store, 17% in a supermarket, 12% paying friends and family.

The ‘new normal’ and acceptance: In August 2020, LINK started asking about consumers’ experience of cash acceptance, where they had wanted to use cash but could not (25%) and whether they had walked away as a result (13%).

While survey results slowly changed as various lockdowns were introduced or relaxed, in general cash use gradually increased so by summer 2021, 67% (+14%) of people had used cash in the past two weeks and 69% thought they would use less in future (-11%).  However, the percentage using less cash overall was almost unchanged (72%), as was consumers’ experience of cash acceptance.

Latest research and looking ahead: By the end of January 2022, in England, the Government announced an end to Plan B measures. This was the first time LINK conducted the research since summer 2021 and it showed the number of consumers using cash in the last two weeks has now increased to 73%, the highest-level LINK has recorded during the pandemic.

The research also showed a change in where people are using cash. Locations which are showing increasing usage are supermarkets, other retail, services like hairdressing and most especially pubs.  This may be a result of those locations starting to accept cash once again, or at least not actively discouraging it. Locations which have shown very little change are convenience stores (by far the most popular location throughout), fuel, DIY stores and parking.

In terms of cash acceptance, compared to summer 2021, there was a small reduction on those who would have preferred to use cash but couldn’t (25% - 22%). Interestingly, customers that walked away saw a small increase (11% - 13%), perhaps reflecting growing impatience and a willingness to go elsewhere. 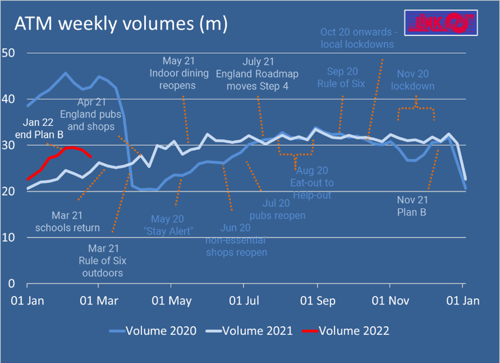 Comparing ATM use in January 2022 compared with a year ago, while overall ATMs were 20% busier this varied a lot across the network. Town centre ATMs were 50%-60% busier and airport ATMs around 200% busier but convenience stores were barely changed, probably because people keep using them right through the pandemic.

Graham Mott, Director of Strategy, LINK: “We monitor ATM use across the UK on a daily basis, but these studies add another layer.  After two years of research, we now have a detailed picture of how people are using cash and why throughout the pandemic.

“LINK’s view is that ATM use will never return to pre-pandemic levels and that people who perhaps were using less cash generally are now entirely comfortable using their phones or contactless. That being said, we’re still seeing £1.5bn withdrawn from ATMs every week. That’s still a lot of money and there are a lot of people who rely entirely on cash.

“Looking ahead, one new development and one we will be monitoring carefully, is that 8% of people say they are going to use more cash to budget and save because of rising living costs. We understand that people are far more comfortable using technology, but importantly, not everyone can use digital and perhaps there’s no better way to budget than notes and coins.”