Home > About us > News and media contact > One year on: how Covid-19 changed the UK’s relationship with cash

One year on: how Covid-19 changed the UK’s relationship with cash

Today, almost 12 months since the UK Government announced the first national Covid-19 lockdown, LINK, the UK’s main ATM cash machine network, has published data showing how our use and relationship with cash has changed through the pandemic.

Throughout 2020 and into 2021, LINK has regularly conducted polling to understand consumers’ response to the coronavirus crisis as LINK works to ensure the needs of cash users are protected and part of LINK’s determination to do that, despite the Covid19 and the long term trend to digital payments.

ATM use: Compared to the previous 12 months the “coronavirus year” has seen the number of ATM transactions fall by 43% and the value of cash withdrawn fall by 36%. That accounts for £37 billion less cash in consumers’ pockets, purses and wallets. 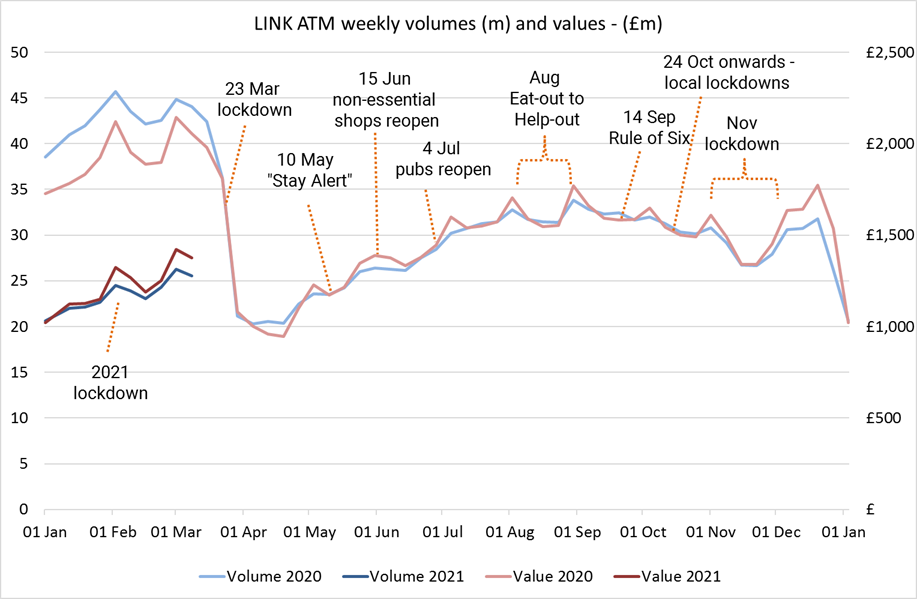 In early April 2020, as the first lockdown’s restrictions bit, ATM withdrawals fell by as much as 68%. In some parts of the country, ATM use declined by more than 80%. While these numbers recovered somewhat through the early summer as retail and leisure reopened, the November, December and now 2021 lockdowns continue to affect ATM use.

Once striking trend however is that while we are visiting ATMs less often, the amount withdrawn on each visit has dramatically increased. During the first lockdown in April, we saw it increase from around £67 per withdrawal to over £85 and while it fell back to £78 during the summer, 2021 has seen it climb back to £84.

ATM numbers: The immediate effect of lockdowns meant that many cash machines located in places forced to shut due to Covid 19 restrictions were switched off and around 3,000 machines located in shopping centres, airports, pubs, cinemas or convenience stores went offline. Additionally, at sites where there were multiple ATMs, such as bank branches or supermarkets, some ATMs which were next to each other were closed to help with social distancing.   As lockdown eases, LINK expects some of these machines to come back online.

Attitudes towards cash: In early March, LINK began polling consumers to see if they were changing their habits in response to the looming crisis. At this stage life was still fairly normal across Britain, although there were 118 reported cases and sadly the first deaths had just been confirmed. Twelve months on, we can see how much has changed:

LINK’s Director of Strategy, Graham Mott: ““Broadly speaking, we saw a huge reduction in ATM withdrawals in the first lockdown and even in the summer, when shops and traditional ‘cash heavy’ locations like pubs and restaurants reopened, ATM use went up, but never recovered to where it was this time last year. However, it’s also clear that most people haven’t stopped using cash entirely. Cash is still popular to use as well as helping those on tight budgets.

“The research also shows that some people are much more comfortable using contactless payments and shopping online. However, we know that over five million adults that continue to rely on cash. For them ATMs and post offices are vital. It’s conceivable that while some people may only use an ATM very rarely, there are still millions of transactions a week and we need to protect the people who use cash and can’t yet go digital.”